On October 17, 1769, the Portola expedition arrived at the San Lorenzo River and set up a cross, calling the area “Santa Cruz,” meaning city of the “Holy Cross.”

Twenty years later, Fathers Alonzo, Salazar, and Lopez arrived and pitched their tents on the hill where the church of the same name now stands. The cornerstone of the mission church was laid on February 27, 1793, on the site of the current parish church, and was dedicated May 10, 1794.

The mission period begins to draw to a close in 1834 when its lands were secularized by the Mexican government. By 1840 the mission buildings were falling into disrepair. In 1845 an earthquake toppled the church’s bell tower. With the collapse of the mission facade, caused by another earthquake on February 16, 1857, the mission period of Holy Cross ended.

In 1857, the cornerstone was laid for a wooden church to replace the mission church. It served the parish until 1898, when it was torn down. In 1862, the Daughters of Charity of St. Vincent de Paul opened Holy Cross School, a day school as well as a boarding school, the first educational institution in the parish. 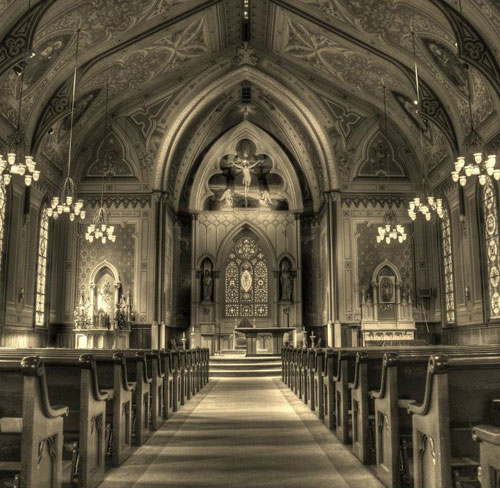 In 1889, the construction of the present brick gothic church, under Rev. Hugh McNamee, marks the end of the transition from Mission Santa Cruz to Holy Cross Parish.

On September 25, 1891, the citizens of Santa Cruz erected a granite archway in front of the church to commemorate the founding of Mission Santa Cruz. New buildings graced the parish from the 1920s through the 1960s, including the high school and rectory.

During the ten years after the earthquake, the church was repaired and retrofitted, along with the convent and the Mission Chapel. A new parish hall and gym were completed in 1999, and a Historic Garden was begun over the old Mission burial grounds in tribute to our Native American brothers and sisters. The photo of the current church interior was graciously contributed to this site by Paul Babb.

Click To Download Our Weekly Bulletin – Please be sure to refresh your web browser so that you are sure to get the *latest*!

Daily Mass
8:30 am in the Mission Chapel (Monday-Friday)